The Reincarnation Of Benjamin Breeg

The single’s promotional image shows Eddie (the band’s mascot) digging out the grave of Benjamin Breeg, whose tombstone states “Aici zace un om despre care nu se știe prea mult“. This is a sentence in Romanian, which translates into “Here lies a man about whom not much is known.” The identity of the character is being held secret by band members. Steve Harris, in an interview featured on the DVD (with special edition CD album), was quoted as saying: “Who is Benjamin Breeg? Ah, now that would be telling”.

Just before the time of the single’s release, a website was created containing a “biography” of Benjamin Breeg. According to the website, the creator was a cousin of Benjamin’s searching for him after he ran across an obscure photograph of his long lost cousin in a box of his recently deceased grandmother’s belongings.

The “biography” stated that Benjamin Breeg was born on 3 September 1939 (the date that France, the United Kingdom, New Zealand, and Australia declare war on Germany after the invasion of Poland, forming the Allies), in London, England. Both of his parents died in a still-unexplained house fire in 1947, and Benjamin was sent to an orphanage. He was smart but very much a loner. Here he took up a fascination with religion and thought of becoming a clergyman. He was never able to settle in with any of the three families that fostered him, and after he turned ten began to experience nightmares. He began to show artistic talent and made many paintings which have since been lost; it is presumed that Benjamin destroyed them himself. His paintings were disturbing to others and when asked what inspired the drawings, he said he painted what he saw in his nightmares. He left the orphanage in 1954 and got a job engraving tombstones at a funeral home. He lived alone and by this time his interest in religion had become almost an obsession. Traveling the world from 1960–70, he moved back to England in 1971. He took up a job at the International Institute of Paranormal Investigation, and over the next six years wrote at least four books on occult practices in countries he’d visited. He disappeared on 18 June 1978, and still has not been found. The cousin of Benjamin who created the webpage asked anyone who knew anything about his whereabouts to contact him, and, according to the final chapter of the story, one man did. The cousin arranged a meeting with the man that was set to take place on 14 August 2006.

The website, as well as the biography of Benjamin Breeg, was completely fictional, and was later found to have been created by the band to increase publicity since they knew that fans would research the name trying to figure out who the character was. The date that the cousin and the informant were supposed to meet was none other than the date of the single’s release. The website – which has since been taken down – sported an image that was allegedly painted by Benjamin Breeg himself. This was a dead give-away for fans who recognized that it showed none other than Eddie, the band’s mascot, easily discernible by Eddie’s one red glowing eye which he has had since the album Somewhere in Time. There is a snapshot available from the old website where is possible to see Benjamin Breeg’s alleged painting, dated back to November 4, 2006. 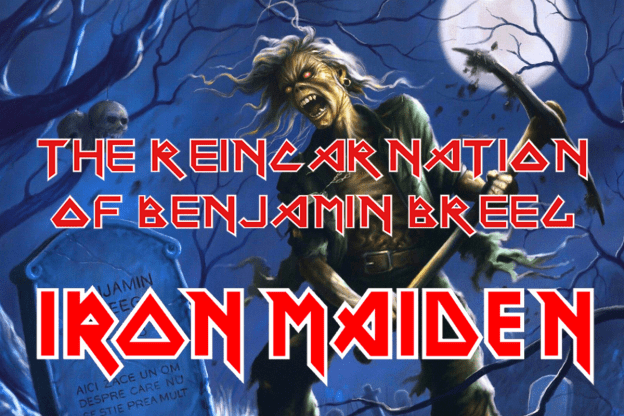